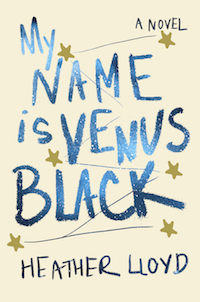 Hi you guys. It’s been a long time since I posted here, and I know you understand why (if you don’t, see my last two posts). But this time, I’m writing to tell you something happy! My first novel, My Name Is Venus Black, is coming out February 27th from Random House.

You may wonder how that happened, given what I’ve been through these last two-plus years. I have wondered the same myself. The shortest and best explanation goes something like this: Before Noah died, he helped rescue my novel. After he died, the novel helped rescue me.

So let me explain. I first started writing Venus’s story back in 2005. It began when I heard a girl’s voice in my head. She sounded really scared. And really angry. She had places to go, people to see—and I soon realized, a crime to commit. Clearly, she expected me to follow her around, listen to her talk, get it all down, and most importantly, get it right.

New to fiction, I failed at that a lot. But I finished a decent first draft and even found an agent. When she couldn’t sell the novel, I felt embarrassed and banished Venus to a dark corner of my computer.

Fast forward to Spring of 2015. My husband Dave and I had recently moved from Colorado to New York City. It was an exciting time, but I found myself without a writing project, restless and at loose ends. When I mentioned this to my son Noah over the phone, he suggested I dig back out that draft of my first novel. He reminded me how much he loved it, and the fact that he could still recall the characters by name, touched me.

I hadn’t thought about Venus in years, but what did I have to lose? So I printed it out and sat down to read, fully expecting to cringe with dismay. And I did. But something else happened, too. My inner editor perked right up: Aha! Of course she doesn’t have a sister. Of course part two is a goose chase. Venus was helpful, too, if a bit bossy: Do this, she said. No, don’t do that! Seriously, is that how you think I sound when I talk?!

I figured three months tops to fix this. But of course, the more I dug in, the clearer it became that my early draft had only skimmed the surface of the moral and emotional dilemmas central to the story. A total rewrite was in order, which seemed a daunting task. And yet, like many writers, I’m never happier than when I’m totally absorbed in a project. As I worked on Venus that spring, summer, and into fall, I often forgot to eat, to pee, or even to turn on the lights when the apartment grew dark.

Then came Halloween. A blur of shock and unspeakable horror. Then came Noah’s funeral in Oregon. And then back to New York and a terrible new reality: Suddenly I was a grief-crazed person holed up in a tiny apartment, afraid to be awake, conscious, and thinking. It seemed nothing (no book, no movie, no conversation) could engage me deeply enough to escape my tormented thoughts.

You know where this is going. One day I sat at my computer and pulled up Venus again. To my astonishment, she’d missed the news. Her world was still intact, untouched by the tragedy that had engulfed my own. But what kind of person returns to a novel so soon after…? And even if I tried, could I actually write a paragraph or edit a simple sentence?

In what I now see as an inexplicable mercy, I could. So I read what I had, touched the keys, and got lost in another world—Venus’s world. In more ways than one, that world was my salvation. It occupied my brain with a blessedly difficult task. And as Venus journeyed toward a life she could want, I borrowed hope from her story.

As you can see by the cover, I wrote Venus under my maiden name. Not to hide from Heather Kopp, or even Noah’s story. But because fiction is a new venture for me, and it has nothing to do with my previous nonfiction writing. My publisher and I agreed—let’s not make people trying to buy online have to sort through a maze of old titles.

Naturally, I dedicated the novel to Noah–not as the world will remember him, but as I knew and loved him.

View all posts by heatherkopp